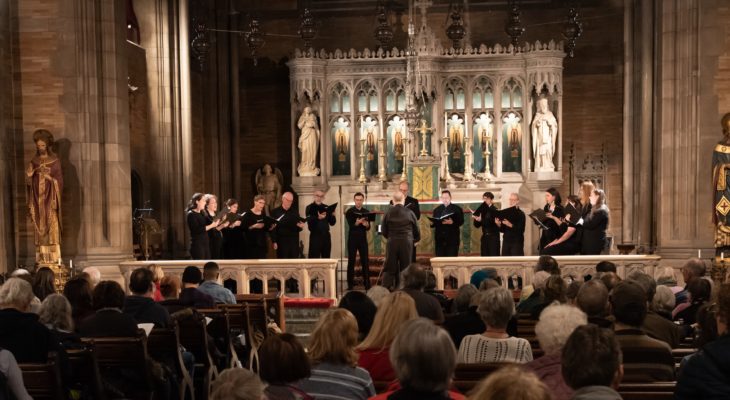 We are on pause.

On March 13, 2020, the unthinkable happened. After a truly lovely dress rehearsal for a concert of music by Tudor composer Christopher Tye, I canceled a concert.  I have never done anything like it in my 25 years as director of Polyhymnia. The day before, some of my music colleagues had gone ahead with a performance of Bach’s motets, to a respectable house. Within 24 hours, the news about COVID 19 became dire. So I canceled.  For the next two and a half months, I went through the grieving process, both for my choir and my father-in-law, one of the greatest guys on the planet. The range of emotions I experienced was amplified by the loss of the choir, which has been a great support during other moments of grief and loss during my life. All of a sudden, music was silent, the churches and concert halls were still, and I was locked up in my home with my husband and cats. Thank God I had them. Then the news got worse. It seems that singing, especially in a group, was considered to be one of the singularly most effective ways of spreading this awful virus. I got about 25 minutes into a webinar from ACDA, before I had to turn it off and be with my own private thoughts. It all seemed pretty bleak and hopeless.

Then the virtual choirs began. I saw lots of great attempts, some good, some not so good, some gospel, some rock and roll, some films. The Sixteen made a short film singing in quarantine of John Sheppard’s Libera me.  It was raw, beautiful, moving, and incredibly timely and sad. I encourage everyone to watch it. After the sadness, I began to think, what a great and actually brave way to reach out, both to the other singers in a choir that is accustomed to singing together a lot, and to everyone else whose lockdown experiences are similar.

Polyhymnia is back. Perhaps not with a roar, but with the quiet steps of a choir processing to the stalls in a cathedral for Mattins. None-the-less, here we are. This blog will provide an outlet not only to say “we are here” but also as it happens, a long-overdue opportunity for a group of really intelligent singers and musicologists to talk about the music we love and why it speaks to us.  We might even share a recipe or two as well. Music, food, and lockdown seem to be interrelated. The music is coming too. We have recorded Tallis’ If ye love me, and are working on Clemens non Papa’s Ego flos campi. Two pieces that mean a lot to us, and would have been on the postponed ( I refuse to say canceled) May concert, which was to have been a raucous and musical celebration of 25 years of concerts. Virtual choirs take more time to create than live ones, so we will all have to be patient. But, then again, the singers have been patient with me and my eccentricities for years. We all have the same goal, in the end, make music, in whatever way we can with the time we are given. Our only task is to make the best of it.

We will get our roar; we will return to the concert stage. COVID can’t last forever, but it is, sadly, our present. We’ll be back when science says its OK. Until then, here we are. Get to know us; we are a pretty interesting lot. I think when you see the posts from the singers, you will perhaps better understand why the rehearsals are so much fun, and why we are so devoted to this rather unusual period of music.